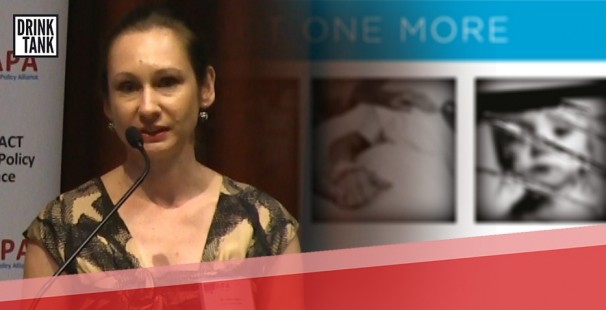 The following address was given by Clare Hughes at the NSW ACT Alcohol Policy Alliance (NAAPA) 2015 NSW Election Platform launch. Clare is the Nutrition Program Manager for Cancer Council NSW, and works on public health research including on alcohol and cancer.

When the Cancer Council NSW was approached to be part of NAAPA we knew it was something that we needed to be part of if we were to achieve our mission of beating cancer.

As well as conducting and funding world class research and providing information and support to people affected by cancer, our priorities include preventing cancer in the New South Wales (NSW) community by promoting healthy lifestyles and advocating to ensuring Governments act to reduce cancer risk.

With our head office based in Kings Cross we recognised that the initial priorities for NAAPA needed to be around addressing some the harms associated with the heavy weekend drinking culture for which this area has sadly become known. And NAAPA has had some brilliant successes since it was established.

But our concerns about the harms associated with alcohol consumption are related to the long term health consequences of Australia’s drinking culture.

Many Australians take pride in our well-established drinking culture. For most Australian’s, catching up with friends and family involves a celebratory beer, wine, champagne or cocktail…or two…. or three…

What many people don’t realise is that their love of alcohol is increasing their risk of developing cancer and other chronic diseases.

The International Agency for Research on Cancer has recognised alcohol as a Group 1 carcinogen which is the highest rating for substances that cause cancer.

While many people would first associate alcohol with cancers of the liver; alcohol consumption is a risk factor for some of the more common cancers we see in Australia.

Cancer Council Australia estimates that anywhere between 2,182 and 6,620 new cases of cancer in Australia, or between nearly 2 and 6% of cancer cases in 2009, were attributable to long-term, chronic use of alcohol.

Alcohol use and cancer have a dose-response relationship; the more alcohol consumed over time, the higher the risk. Smoking and alcohol together have a synergistic effect, meaning that the combined effects greatly exceed the risk from either one alone.

As well as being a direct cause of several cancers, alcohol consumption may indirectly increase cancer risk by contributing to obesity and overweight, which are linked by convincing evidence to cancers of the oesophagus, pancreas, bowel, breast (in post-menopausal women), endometrium and kidney. There is also probable evidence that body fatness is a cause of gallbladder cancer.

Unfortunately, many people don’t know this, nor do they think of the long term impact of alcohol when they’re considering whether or not they have one more drink.

In 2013, Cancer Council NSW surveyed more than 3000 NSW adults about cancer prevention risk factors. Compared to other lifestyle risk factors such as smoking and sun exposure, our research shows that awareness of the link between alcohol and cancer is low.

Knowledge of alcohol and cancer

Only 47% of respondents were aware that alcohol consumption was a risk factor for cancer.

Of concern was the finding that 27% thought that consuming 1-2 drinks each day actually delivered health benefits, while less than half though that limiting alcohol consumption would help prevent cancer.

Perhaps working against us is the notion that low levels of alcohol can reduce cardiovascular disease risk. It’s much more palatable to justify drinking a few glasses of wine when you can claim that you’re helping your heart.

But the potential benefits of light to moderate alcohol consumption on cardiovascular disease is the subject of ongoing scientific debate.

A number of studies have indicated that low to moderate consumption of alcohol (1?2 standard drinks per day) may reduce the risk of cardiovascular disease for middle?aged and older people. But other research has challenged the findings and methodologies of these studies, showing no evidence of a protective effect or suggesting that the protective effect may have been overestimated.

On the other hand the adverse effects of higher consumption levels are well documented.

Alcohol can raise blood pressure and increase the risk of other cardiovascular conditions such as heart attack, arrhythmias, cardiomyopathy as well as stroke.

Additionally, over the longer term harmful drinking is associated with alcohol dependence, cirrhosis of the liver, chronic kidney disease, types of dementia and other mental health problems.

While studies suggesting that low levels of alcohol consumption may be associated with a reduced risk of cardiovascular disease and Type 2 diabetes, it’s important to note that neither the Heart Foundation or Diabetes Australia nor the World Health Organization recommend alcohol consumption as a preventive health measure.

Australian data shows that that nearly 20% of adults consume more that 2 standard drinks per day putting them at increased lifetime risk of harm – that includes 29% of men and 10% of women.

Interestingly, unlike other chronic disease risk factors like obesity and smoking, the highest rates of alcohol consumption at levels that pose long-term health risks were found in the least disadvantaged areas, with consumption declining as socioeconomic disadvantage increases.

Clearly a lot needs to be done to highlight alcohol as a chronic disease risk factor and encourage people to limit alcohol intake to reduce their risk.

Social marketing and community education need to be part of any government strategy to reduce chronic disease and the health burden related with alcohol use. This is why Cancer Council endorses the NAAPA recommendations for an alcohol education campaign that highlights the broader health impacts of alcohol consumption.

But public health groups know all too well that public education will never be the silver bullet that addresses problems that affect populations.

Policy interventions are needed to create an environment which supports people to choose to drink alcohol at lower levels that will reduce their long-term risk of chronic disease.

That’s why Cancer Council has been supportive of NAAPA’s efforts to influence policies relating to the availability of alcohol, both in terms of the number and density of outlets selling alcohol and opening hours of retail outlets serving alcohol. We support moves to strengthen liquor licensing laws, and increase measures around high-risk outlets and areas like Kings Cross.

We know from our experience in tobacco control that pricing controls, labelling interventions and advertising restrictions will also be necessary to reshape Australia’s drinking culture, not just in terms of binge drinking but the longer-term consumption of even moderate amounts of alcohol.

Support was highest for interventions relating to labelling, and protecting children, with the majority of respondents supporting health warnings and alcohol guidelines on product labels and restricting internet marketing of alcohol to young people.

Conversely, support for restrictions on alcohol sports sponsorship, reducing the number of outlets, volumetric taxations and increased alcohol prices were supported by fewer than half of respondents, despite there being evidence to support these interventions.

Although these policy interventions will have a larger impact on the acute harms associated with alcohol consumption, they will also contribute to positively changing the social norms around our drinking culture, and may ultimately result in lower levels of alcohol-related chronic diseases such as cancer.

So on behalf of Cancer Council NSW, I congratulate NAAPA on its successes to date and on its 2015 election platform.

The Cancer Council looks forward to working with NAAPA to create a safer drinking culture that reduces the future burden of alcohol related chronic disease on NSW families and communities.

Clare is the Nutrition Program Manager for Cancer Council NSW, and works on public health research including on alcohol and cancer.