Just four days ago [on 3 July], the New York Times reported, “Is Alcohol Good for You? An Industry-Backed Study Seeks Answers.” Because it was the day before the July 4th holiday, the story may not have received the attention it deserves, so we shine a spotlight on it here.

Now the National Institutes of Health is starting a $100 million clinical trial to test for the first time whether a drink a day really does prevent heart attacks. And guess who is picking up most of the tab?

Five companies that are among the world’s largest alcoholic beverage manufacturers — Anheuser-Busch InBev, Heineken, Diageo, Pernod Ricard and Carlsberg — have so far pledged $67.7 million to a foundation that raises money for the National Institutes of Health.  ….

The decision to let the alcohol industry pay the bulk of the cost has raised concern among researchers who track influence-peddling in science.

“Research shows that industry-sponsored research almost invariably favors the interests of the industry sponsor, even when investigators believe they are immune from such influence,” said Marion Nestle, a professor of nutrition and food studies at New York University who is the author of several books on the topic, including “Food Politics: How the Food Industry Influences Nutrition and Health.”

The Times describes Harvard as the “hub of the clinical trial, and describes the school’s “long relationship with the alcoholic beverage industry, including a $3.3 million endowed professorship in psychiatry and behavioral science funded by the Foundation for Advancing Alcohol Responsibility (FAAR), founded by distillers.”

That same FAAR foundation has also funded two journalism training workshops hosted by the Poynter Institute, a leading journalism training organization. One of the sessions, called “SciFacts: Fact-Checking Claims About Science,” was held in June in Saint Petersburg, Florida.  I was asked to speak at that session and to give advice about the agenda.  I declined the invitation to speak because I had made a prior commitment to speak at a conflict of interest seminar run by the PharmedOut.org project at Georgetown University Medical Center.  But I did raise questions with Poynter about a conflict of interest in accepting funding from the alcohol foundation, and the tentative plans to have perhaps two spots on the program that discussed alcohol issues. 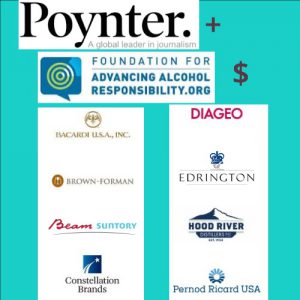 Apparently all expenses for attendees were paid by the foundation, as the program disclosed: “This workshop is free thanks to the support of the Foundation for Advancing Alcohol Responsibility.”

The Foundation CEO, Ralph Blackman, spoke to the journalists who attended.  The moment was captured by the Foundation on Twitter.

One attendee gushed on Twitter about mealtime at the workshop, “Nobody told me science was so fancy.”

After this event had concluded, Poynter approached me again about leading a session at another such workshop, but this time in Washington, DC, in September.

I told my Poynter contact that if the alcohol foundation was funding the event, I could not attend.

And that was that.

1. Was it absolutely necessary that you accepted alcohol industry funding?

2. Did you exhaust all other options? Or did you gravitate towards the alcohol money because it was easy money?

3. Did you consider the conflicts of interest inherent in this funding arrangement?

4. What did you do to mitigate the conflicts of interest?

Regarding the NIH alcohol industry-funded trial, the Times reported:

Art Caplan, the director of medical ethics at the N.Y.U. School of Medicine, said the role of the industry should be disclosed when the results eventually are disseminated to the public. “People will react differently if it says the study is ‘sponsored by N.I.H.’ or ‘sponsored by Anheuser-Busch,’” he said.

The Poynter Institute is setting a bad example and delivering the wrong message to journalists – that it is OK to accept industry funding to further the cause of special interests in the health care field.  Even if the agenda was chosen by Poynter and even if they say the funding came with no strings attached, there is a cloud hanging over the arrangement.  Poynter accepted the money, then gave the funder a forum and a platform it may not otherwise have to reach journalists. The funder had speaking opportunities at the Florida workshop, and is scheduled to have more at the DC event, and their material and logo are prominent in the workshops.

Marion Nestle, the NYU professor quoted in the Times story above, responded by email to some of my questions about the Poynter-FAAR deal.

“The conflict of interest is so big it makes me gasp. The alcohol industry wants journalists to extol the (purported) health benefits of drinking alcohol and to minimize the risks. Nothing that comes out of this will make Poynter look good.  Is the money really worth the reputational risk? Research on industry funding makes it crystal clear that recipients are unaware of its influence. The influence is unconscious, unintentional and unrecognized. The evidence base on this point is compelling.”

NYU’s Art Caplan, also quoted in the Times story, disclosed that he once served on the Poynter Board, has friends on the Poynter faculty, and does a podcast with one of them.  However, he wrote:

“Alcohol is looking to keep attention off of the harm that it does by talking about ‘drinking responsibly’ and ‘designated drivers’ etc.  So there is some greenwashing going on. I think that media must be wary of sole-source industry foundation funding since the booze industry is well aware of what is going on with tobacco and sugary beverages and fast food and does not want to join that crowd.  Image buffing is a subtle way to shape discourse but it is a way. The key to me to minimizing industry foundation influence is to seek relatively equal contributions/co-sponsorships from critics, opponents or other interest groups who are indifferent to industry or hostile to it. No sole source industry foundation funding.”

Shannon Brownlee,senior vice president of the Lown Institute and a visiting scientist at the Harvard T.H. Chan School of Public Health, wrote to me:

“If this were the Tobacco Institute, no self-respecting media organization on the planet would even consider taking the money — and no journalist with an ounce of good sense would attend a training workshop that was being sponsored by it. So what makes the Poynter Institute think FAAR is any different?  The Institute wants the money, that’s what, and they’ve persuaded themselves that they can remain independent and unbiased even when all the evidence suggests that corporate sponsorship invariably affects (those who accept it).”

Between what we learned in the Times story about industry-funded research, and what we’ve seen with this industry-funded journalism workshop, it feels like a sophisticated campaign by the alcohol industry to sway public opinion. And a self-proclaimed “global leader” like Poynter is playing right along. The alcohol industry doesn’t need Poynter to be part of its PR arm.  Let the alcohol foundation purchase its own advertising and host its own workshops.

My Poynter contact trotted out the same tired old false dichotomy that simply doesn’t apply in such cases, writing, “if the alternative is no teaching at all, I don’t know that Poynter would be closer to fulfilling its mission.”  But we are not discussing a choice between – option 1 – take industry money, or – option 2 (the only other option) – offer no teaching at all.

I even offered to help Poynter explore other options.  Shannon Brownlee suggests, “There are any number of alternatives to corporate sponsorship. Get a grant from a non-profit foundation that doesn’t represent industry. The Knight Foundation, for instance. Conduct the workshops online.”

In recent weeks, we’ve reported on the following entities taking special interest funding to do journalism, to discuss issues in journalism, or to offer journalism training:

All of these stories are archived on our page, “The trail of tainted funding: Conflicts of interest in healthcare, academics, public relations and journalism.” As is the case with almost all of the entities mentioned above, I’ve had a great deal of respect for the Poynter Institute through the years. But I am troubled by the trends we have observed.

The train has left the station.  Big bucks interests – big pharma, big medical centers, big booze – have seen an opening. And they’ve seen it’s not that difficult, or expensive, to sidle up next to journalism efforts and to buy the best PR that money can buy.

I was named to be a Poynter Institute Ethics Fellow in 2008-9.

As publisher, I don’t feel I have the right to tell a part-time staffer what he or she can do when not working for HealthNewsReview.org.  I knew that Ms. Adams was going to attend and made no suggestions to her prior to her participation in the event.  She was not formally representing HealthNewsReview.org at this event.

This article was first published here by Gary Schwitzers, the founder and publisher of HealthNewsReview.org, on 6 July 2017.

Gary Schwitzer is founder and publisher of HealthNewsReview.org. He taught media ethics for 9 years at the University of Minnesota.